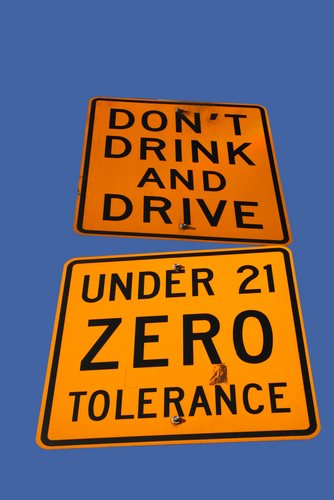 Zero tolerance laws are laws created by states that pertain to underage drunk driving. The alarming rise in the number of drivers under the age of 21 that have been caught drunk driving continues to draw public attention. This led to the establishment of zero tolerance laws throughout states, with their own regulations and penalties, intending to stop the spread of underage drunk driving.
It is illegal for anyone in the United States who is under the age of 21 to consume or purchase alcohol under set laws.  However, the numbers underage drunk driving incidents has grown, and led to a great deal of accidents and deaths in the past years, calling for a solution.
In an attempt to solve the issue the states imposed these zero tolerance laws that are very strict, to adhere to underage drunk drivers. Laws across every state in the United States imply that anyone over a BAC level of 0.08 is found to be legally intoxicated. This pertains only to people of legal drinking age, and not to these minors.
The zero tolerance law has imposed a BAC level that varies through states between these three: 0.00, 0.01, or 0.02 (the highest). The most commonly used BAC level for zero tolerance laws is the 0.02 seen in more states than the other two. These levels are so low to discourage young people from even attempting to drink and drive.
Anyone who is pulled over and found to be drinking (underage) and driving, directly violating this law will face serious consequences. Every state has different penalties for these violations, just like they do for regular DUI violations.
However, due to the strict nature of the zero tolerance law, violation could lead to an automatic license suspension and or revocation. Most young drivers are still in the process of learning how to drive better and acquiring more road skills, drinking alcohol before driving can impair them “worse” than it could an adult.
This is not to say an adult should drink and drive over a minor, it’s just stressing the importance of avoiding underage drinking combined with operating an automobile. With the strictly low BAC level, a person under zero tolerance law can be in violation of it even after one drink, regardless if they are impaired or not.
Every state has still not imposed the zero tolerance laws, but this doesn’t mean they are more lenient to underage drunk drivers. They still impose stricter penalties for those convicted of DUI that are under 21 years of age. What these laws basically state is anyone under that age that has a BAC level of just 0.00 and of course above, will be convicted of DUI and is in violation of zero tolerance laws.