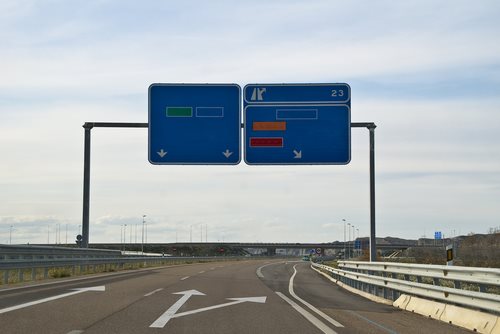 The roadside tests conducted by a police officer who has suspicion of a driver being drunk are known as Field Sobriety Tests (FSTs). They are also known as Standardized Field Sobriety Tests, but since their implementation, officers/departments have added certain non-standardized tests as well. These non-standard tests can vary, but are mainly focused on combining a mental and physical activity.
Field Sobriety Tests are administered to affirm a probable cause for the officer for someone he believes to be driving under the influence. These tests  allow police officers to make a better judgment of whether or not the individual is drunk. The Standardized FST is comprised of such tasks as the horizontal gaze nystagmus test (HGN), the one-leg stand, and the walk and turn.  The HGN test is a very common tactic used to  help determine if the driver has been intoxicated or not. The officer uses an object such as their pen or flashlight and has the driver focus on it.
The object will be moved in a horizontal line back and forth, and the driver is asked to follow the object with their eyes. The focused pursuit of the person’s eyes, or lack thereof can assist the officer in judging their condition. The next standardized test is the one-leg stand, which is conducted off to the side of the road or any safe area. The driver is asked to raise one leg 6 inches off the ground while keeping their arms at their sides, then they can be asked to count out loud for either 15-30 seconds, switch legs, and repeat. The officer pays close attention to whether or not the person’s physical performance and their ability to follow the directions given. This type of test is referred to as a divided attention test.
During the walk and turn test, the driver will be told to stand in an awkward stance for a length of time,  while they are given their instructions. The driver will then be told to take about 9 steps forward, using heel to toe (touching) formation while counting their steps out loud. Usually the driver is told to keep their arms out at their sides and once they reach the end, they must be able to turn around and repeat.
These tests combined help the officer to make a determination whether or not a person is under the influence. If a person fails in one or more areas of this test, the officer can choose to arrest the person on the spot for suspicion of DUI and take them to the police station or hospital for further testing. The refusal of a person to take part in these tests  will most likely result in their arrest. Non-standardized field sobriety tests can vary in specifics but most are based on divided attention, and use that as the grounds for determination.
FSTs are used widely across the United States as a means to help officers confirm a DUI suspicion through probable cause. They are sometimes deemed controversial and ineffective, with arguments from both sides.